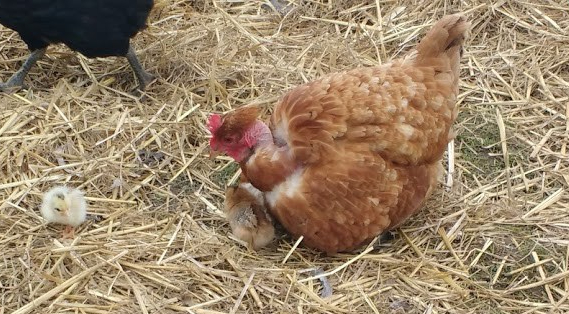 We call her Naked Neck. Everyone that sees her says, “What’s wrong with that one?”

I have nine chickens and she is the smartest of them all. One of my huge white chickens, Big Mama, was sitting on a pile of 6 eggs for about a week. Next time I went to the coop, Naked Neck was sitting on the eggs. I don’t know how she worked her way into this position. Big Mama was sitting on 2 eggs in the next box. Trickery? Negotiation? Did I say she was smart? No bird-brain here. It seemed this faithful little mama never moved. Every time I was in the coop she was in the same position, night or day.

I was borrowing the space where my chickens were living and I had to move them to my own coop when it was ready. Big Mama had her 2 chicks. I moved the rest and saved Naked Neck and Big Mama for last, not wanting to stress them and the babies out. The moving deadline was fast approaching. I moved Big Mama with the 2 chicks and she took a licking, even though it was just a few days since all the hens were one happy family before being separated, and she’d been high in the pecking order. I was nervous about moving Naked Neck, suspecting the other chickens would attack her and that she would be more vulnerable while defending her chicks or eggs.

Not only was I  unsure how Naked Neck would take to sitting on her eggs in a new location, my mother’s intuition told me they would hatch any day. The final day came and I had to do the dastardly deed. At that point I didn’t even know how long she’d been sitting on that pile. Seemed like 6 months to me. Chicks hatch in 3 weeks. I’m the genius that had no idea when my own babies’ conception or due dates were. I’d looked at the calendar and made very wild guesses. They came sooner or later, though I could swear one was way over-cooked. I’m not saying which one.

The Rancher and I wondered if the eggs were duds and she was just wasting her time. So he judiciously grabbed one of the eggs and cracked it open. Dag-nab-it! There sat a fully developed chick ready to hatch any time. I wanted to kick rocks but there were none in sight. So painful, too late.

He gently picked mama up despite her protests. There, under her, were 8 eggs and the tiniest chick I ever saw!

No sooner did we settle her into the new coop than she scattered her eggs all over the place and proceeded to follow her meandering baby around. It was a frigid morning so El Ranchero collected the eggs and promptly set them in an incubator to maintain their temperature and hopefully bring them to term. 2 days later, a loud little peep-squeak hopped out of its shell in the incubator, stuck her head way up in an attempted stand and yelled, “Are you my mama?” She flopped over right away. Now what were we going to do? I wasn’t going to have chicks in my house again after last spring.

HE had set them up in MY closet claiming it was their best chance at making it. MY closet. In no time, they stunk to high heaven. I mean odious. In MY closet. I decided there and then not to get attached to the little loud tyke as his chances of a long fulfilling life were nil if it had anything to do with my closet.

The Rancher came to the rescue again. He took the little thing and set it under Naked Neck. Mama walked away and hunkered down on the first chick. The Rancher set the newbie under her again. And again. He’s a stubborn one and she’s a smart one so she let the little squatter in after a few more tries. They were a happy little family.

2 days ago, another little dinosaur hatched. Man they are loud. It was a mini-naked neck and the cutest thing ever!

I knew we were pushing our luck with the little yellow guy since it had been several days but I marched it to the coop. I hoped mum would recognize herself in it till I realized she probably had never seen herself. Hmm. The new chick instantly started following Big White Mama.

Big Mama was having none of it. She pecked hard at the chick which was the size of her own head. I shooed her away, indignant, and she flew across the coop. Little Naked took off after her. This wasn’t good. I scooped her up and followed Naked Neck. Mhhh… How to approach? Was this going to be a rear or front entry? I thought rear would be safer for me. Mama scooted away with her two babies in tow. She then hunkered down and I ushered Naked Necklet in. Mama scooted away again. Oh dear. This was a creature only a mother could love and here was mama rejecting her own ugly likeness.

5 tries later, Necklet marched right in and did whatever they do under there. Success!

Later in the day I paid them a courtesy call to see how things were going. I took the picture above – and look, there’s Big Foot in the background in his typical pose, except he’s normally going the other way! Necklet is all fluffy and happy on the left, she is saying, “I found my mama!” She keeps casting longing glances at Big Mama but I suspect that will abate with time. Maybe she can have aunty time down the road.

I have six more eggs in the incubator. I don’t know how much more of this Naked Neck with tolerate but I’ll keep trying. She is being awfully gracious considering I don’t know what I would have done if people kept sneaking me new-born infants just because I had just had one and was in the mode.

If all else fails, I hear there is a recipe out there for fully developed chicks in the egg. Hmm…

This guy was hatched this morning!