(I blogged this 2 years ago and it was a little weird to see a prompt with the exact same title. For a second there I couldn’t find it in my archives and I thought, ‘They’ve deleted my article and stolen the title!!’ And then I found it.)

My son James catches his kindergarten bus at 12:18pm. He and I kick rocks and philosophize while we wait at the stop. We have special mother-son moments that I’ll relish for life. We sit there quietly and hold hands, or tell stories, or dissect bugs. I teach him the names of flowers and tell him what little boys in Africa do. He tells me a million facts about soldiers and the army. I eat up every minute, all too cognizant that my baby has flown the coop.

Some days he rudely awakens me from my maternal trance and asks me to wait in the house while he catches the bus.
One sunny afternoon around 12:16 while we waited for the bus, he frantically needed to use the bathroom. We tore into the house as he fumbled with his belt. I realized we had forgotten his library book so I dashed into  the kitchen, grabbed it from counter, and rushed to the bathroom to put it in his backpack. In the deep recesses of my mind, I heard the rumble of the old bus coming down the hill.

I stood aghast in the bathroom and things started to move in slow motion. So many questions flooded my mind: How on earth could so much fluid sit on the toilet-seat in a matter of seconds? How could there be gallons more on the floor? I was swirling in a urine tsunami, powerless, disoriented, confused.
He has two simple instructions to follow before he pees, and three after. We all know them. They are listed here in their irreducible complexity:
1. Lift up the seat.
2. Aim into the toilet.
Pee.
1. Put down the seat.
2. Flush.
3. Wash your hands.

My final question was ‘where is he?’

I staggered to the front door like a drunken sailor, just in time to see him nonchalantly hopping onto the bus. He gave Driver Dan his daily high-five, looked back over his little shoulder, and smiled at me.

I exploded through the front door screaming “Get back in here!” Dan took one look at my face, assessed the imminent doom, hastily shut the bus door, and peeled off. He was taking corners on side wheels and was a block away before he remembered to retract the stop sign. I was chasing them down the road, occasionally leaping into the air and waving my fists wildly. I don’t remember what I was yelling. If I had warned my boys once, I had warned them a million times.
Eventually I stopped. Hopeless, I walked back spent and ragged. I was mumbling and probably drooling. I dragged my heavy, sodden feet with fistfuls of my own hair and a lousy library book in my hands. One neighbor cursorily shut her blinds. Another hurried into his house and double-bolted his door.
Could Dan be an accomplice to this crime?  I suppose, after all his years as a bus driver, he has a capacity to read premeditation on the face of a determined mother and was actually saving me from life in prison. 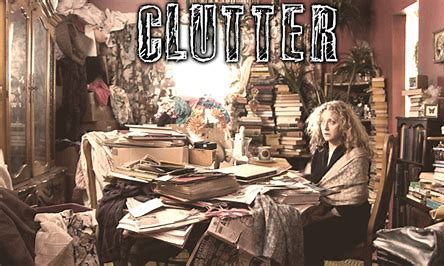 I don’t spend ridiculous amounts of time in lavish hotels just to catch a break from life. I don’t wear furs or flaunt my Patek chronometer (I don’t own one.) I don’t use fancy phrases and blow cigarette smoke in the butlers’ faces as I sashay in my spiffy high-heels. But what must stupefy the staff is my cluttering aptitude.

Everyone that knows me knows I am a cluttering aficionada. I take it to the next level.  Piles spontaneously accumulate at the mention of my name. The chambermaids must gasp and beat their breasts, saying, “How could this be? She was only here one night!”

I learned of this moral weakness the first day I owned a home. Before this, it was my mother’s problem. It clearly did not bother her because she never chased me with an ax for it. That said, it bothers me tremendously. It is a purulent, gaping wound in my character. I have fought it; sincerely resolved never to lay any item on any flat surface again – ever;  been repeatedly hypnotized for it; purchased organizational books and even the specific baskets they recommended; attended AND  taught weekend-long seminars on it; rebuked and cast out the demon of cluttering! And for what?!

First, in my defense, let it be known that at least 40% of my  piles consist of items that do not belong to me. People who call themselves my friends come to my home with their household items and leave them here. They probably then gather to discuss how to lure me to a posh  recovery center  in Beverly Hills.

So this year, I am making my first new year’s resolution in a decade. I am going to embrace my cluttering ways! I will own them and proudly display all labels that go with them. I am everything clutter – seeming chaos and dreadful disarray are an obvious sign of my mental state of mayhem. That is me; sweating bullets as I frantically seek that one sheet of paper that was right here.

Along with that is a cessation of dreams of the high life in profligate hotels. I will save my money and stay home to revel in my piles. I will titter and cackle in celebration of them. No more furs, no more Patek. No more nasty cigarette smoke in people’s faces. No more devastated chambermaids in counseling or having to take their own lavish vacations to recover from my doings. Come to me clutter, mama awaits!

James is my cowboy ninja. He is fearsome and bad to the bone. His favorite thing in the whole wide world, as they say, though he hardly knows what lies beyond “them hills”, is to wrestle. He makes feral noises while he leaps across furniture, flying through the air and swiftly kicking down doors. He is a deadly weapon. And a study in contradictions

James’ body is a formidable STSD (Soft Texture Seeking Device). His eyes, the Ocular STSDs are highly trained and skilled in this sensory operation.  They are on the frontlines of The Mission. These  binocular STSDs swiftly scan a room upon entry to see if any soft textures lie around unappreciated. They summarily divide the room’s height, breadth, and width,  and visually locate  subjects, a rare and difficult sciart(combination of a field that’s a science and an art) called oculocation. At this stage, his body enters a trance as it responds to the irresistible lure  of the subject. This trance state allows all system energies to be funneled to the STSD.

His left forefinger and thumb make up the Digit STSD. This DSTSD is the principal confirmating feature of The Mission and has astonishing prowess and accuracy. It is intricately tuned to the nanounit and serves as the final test of approval. He can be found on the couch sucking his finger while he fondles dad’s hair or in my closet drawers tracking down satin. For years now he has worn his pants and underwear with the tag facing forward. Reaching back for tags might compromise system security, not to mention it is less practical when one is lounging on his or her back. Needless to say, he doesn’t wear just any pants or underwear. Not only do they need to have camouflage print but the tag has to meet stringent STSD standards.

Unfortunately for him, around the age of three he had to stop reaching down women’s shirts. Women had difficulty  cooperating with this aspect of The Mission.  He even tried warming up to them and getting them to adore him before doing the Stealth Dive. Their eyes expanded to an unnatural size and every last one made a visceral whelp. Even rather large women jumped to astonishing heights when he executed this maneuver.  They were surprisingly predictable. They took it personally. Did they not fathom what softness laid yonder awaiting confirmating?  But I digress.

His older brother and I are planning his wrestling career for it is a promising one. We can see it now, his opponent, let’s call him Thunderwear will come walking towards the wrestling ring, the crowd gone wild. He has gnarly scars on his face, and a proud snarl to go with them. Grossly bulging arms are held by two women who are almost dressed. He has won many a match and inspires his opponents to piddle their pants, but today Thunderwear is visibly alarmed, and has reason to be.

The massive doors swing open and the frenzied  crowd is stilled to an ominous hush. Even the commentator is speechless. James’ eyes are narrowed. The mob steps back to let him pass, melting in fear. A spectator passes out, overwhelmed.

As soon as he gets on the ring, the drums roll and the  crowd rises like a pulsating chanting monster. The fight lasts but a few minutes. It is painfully predictable, much like the women down whose bosoms James thrust his 3 year old hands. The paramedics strap Thunderwear’s limp remains to a gurney. The crowd pays its respects then thunders to life as James leaves the ring in his signature stance – sucking his right forefinger and fondling his underwear tag with his left hand. He hardly notices the cheers. It’s been a good day in the ring.